Before you begin editing, read our policies.
Scroll down to view our affiliates!

Houston is the only artist to chart seven consecutive No. 1 Billboard Hot 100 hits. She is the second artist behind Elton John and the only female artist to have two number-one Billboard 200 Album awards (formerly "Top Pop Album") on the Billboard magazine year-end charts.

Houston's 1985 debut album Whitney Houston became the best-selling debut album by a female act at the time of its release. The album was named Rolling Stone's best album of 1986, and was ranked at number 254 on Rolling Stone's list of the 500 Greatest Albums of All Time. Her second studio album Whitney (1987) became the first album by a female artist to debut at number one on the Billboard 200 albums chart. 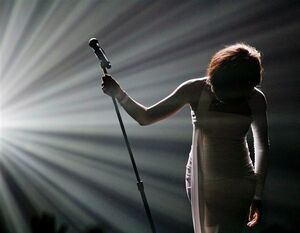 Go to these sites for info or for help with your own wiki!

Want your community included? See how!

Retrieved from "https://whitneyhouston.fandom.com/wiki/Whitney_Houston_Wiki?oldid=4445"
Community content is available under CC-BY-SA unless otherwise noted.